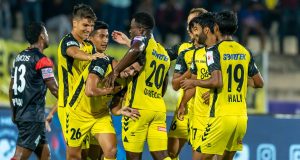 Manolo Marquez’s Hyderabad FC capped off a memorable, title-winning 2022 with a clinical performance against NorthEast United FC, as they registered a 6-1 victory over the Highlanders at the GMC Balayogi Athletic Stadium in Gachibowli on Thursday.

Javi Siverio (8′,73′) scored in either half while Borja Herrera (24′), Odei Onaindia (30′) and Joel Chianese (77′) also found the back of the net, as Hyderabad FC were also aided by an own goal from Gaurav Bora (80′) to register their joint biggest win ever in the Indian Super League.

Aaron Evans (36′) scored for the visitors but it was Hyderabad FC who collected all three points, to once again move to the top of the league table, with 28 points after 12 games.

It all started with Siverio finding himself unmarked inside the box from a Borja corner and the Spaniard made no mistake to volley in his third of the campaign and give Manolo’s side an early lead.

Borja Herrera was running the game to his will, and managed to add a second from a low range drive 24 minutes in. His shot found the bottom corner and Hyderabad FC were 2-0 up, even as they created more and more chances.

Odei Onaindia added a third with a sweet volley, after a set-piece from Borja fell to him inside the box. Evans pulled one back for NorthEast United FC but Hyderabad FC were in prime position, going into half-time.

Hyderabad FC came back out with similar intent, and made it four as Joel Chianese came off the bench and scored with practically his first touch of the game. Siverio scored the fifth after Mohammad Yasir put in a delicious cross to break open the NorthEast defense once again.

Chianese could have had a second as well, but Mirshad Michu, who had a pretty good game pulled off another superb save. But Gaurav Bora was unlucky to see the save deflect into his own net.

Bart Ogbeche, Halicharan Narzary and Rohit Danu had big chances as well while Nikhil Poojary, Akash Mishra, Nim Dorjee Tamang and Hitesh Sharma were all impeccable in what was a collectively impressive performance from Manolo Marquez’s side.

Hyderabad FC scored six in the last game of 2021 and do the same to finish 2022 as well to keep their hunt for the league shield well and truly on.

They are back in action when they take on FC Goa at the Jawaharlal Nehru Stadium in Fatorda on Thursday, January 5.