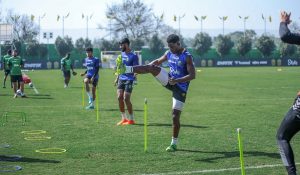 After a late Bartholomew Ogbeche penalty earned them a point against Chennaiyin FC, Manolo Marquez’s Hyderabad FC are back in action this Friday when they take on East Bengal FC at the Saltlake Stadium on January 20.

Currently second in the league table, Hyderabad FC are four points behind league leaders Mumbai City FC while East Bengal FC, with 12 points from 13 games, are eight points off the qualification spots.

Stephen Constantine’s men are fresh from consecutive losses to Jamshedpur FC and Odisha FC but have put on some decent performance after the turn of the year.

Cleiton Silva, the current top goal scorer in the Indian Super League, has scored each of the last six goals for East Bengal FC and will be the danger man for Hyderabad FC in this game. But the likes of Naorem Mahesh, Ivan Gonzalez, Alex Lima, VP Suhair, Jodran O’Doherty, Jerry Lalrinzuala and Lalchungnunga could also prove to be a tough test for Hyderabad FC in this game.

Speaking ahead of this game, “East Bengal have a good coach and very good attacking players. They also have the top goal scorer in the league and it will be an equally tough game for both teams,” said Manolo.

“But it is not just about Cleiton Silva. They have wingers who are dangerous, strong midfielders and very good defenders and they can beat anyone on their day,” he added.

Nim Dorjee Tamang and Odei Onaindia have also been impeccable at the back while Gurmeet Singh has been in top form, as Hyderabad FC have been hard to break at the back.

But they will need to put in a strong performance against a tricky East Bengal FC side, believes Head Coach Manolo Marquez. “We are preparing well for this game. The players trained well to face a team with a different style.”

“It will be a difficult game but we have to keep going. In this league, you can beat every team, but every team is difficult to beat. We showed the same in the last game and this time we hope to play a better game,” said the Spaniard.

Hyderabad FC have lost on both their visits to the Saltlake Stadium this season, once in the Durand Cup against Bengaluru FC and once in the ISL against ATK Mohun Bagan. They will be eager to register their first ever victory at the iconic arena, and will look to keep the pressure on Mumbai City FC, in hunt for the league shield.

Earlier in the season, Manolo’s men registered a 2-0 victory in the reverse fixture in Hyderabad, with Mohammad Yasir and Javier Siverio on the scoresheet and will hope for a similar result on Friday.

The game kicks-off at 7:30pm IST and will be telecasted live on the Star Sports Network with live streaming on Disney+ Hotstar and JioTV.