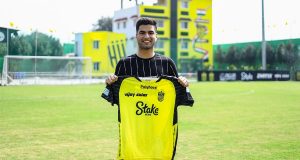 The Jammu and Kashmir-born defender started his career with the J&K State Football Academy before joining the Indian Arrows in 2020. He spent two seasons with the Arrows, making 22 I-League appearances while registering a couple of goals.

He also represented the India U-20 side in the 2022 SAFF U-20 Championship and has signed for his first ISL club with Hyderabad FC.

“I am really excited to be a part of this superb club,” said Sajjad, after penning his deal. “HFC are renowned to give chances and groom youngsters and we have seen that over the last three seasons. It’s an honor for me to be part of this club, and I hope to grow as a professional in the coming seasons,” he added.

Sajad will spend the rest of the season on loan with I-League side Gokulam Kerala FC, who are currently fourth in the league table.