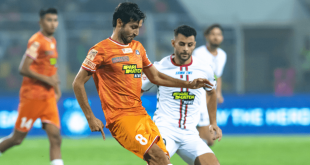 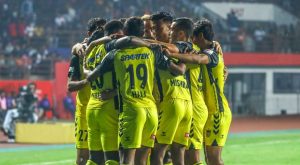 Continuing their impressive start to the 2022-23 Indian Super League campaign, Hyderabad FC put in another resolute display to beat last season’s League Shield winners Jamshedpur FC 1-0 in what was a nail-biting finish at the JRD Tata Sports Complex in Jamshedpur on Wednesday.

Mohammad Yasir (48′) registered a winner in the second game running as Hyderabad FC strengthen their place at the top of the league table, with 16 points from their six games.

Manolo Marquez made just one change to the Starting XI as Bartholomew Ogbeche started in place of Borja Herrera, but that plan did not seem to work as the first half was not ideal for the men in Yellow and Black.

Jamshedpur FC had a game plan they stuck to, and managed to hit Hyderabad on the counter, with Daniel Chukwu missing the best chance of the game thanks to a reflex goal-line save from Kattimani.

Boris Thangjam, Harry Sawyer and Jay Emmanuel Thomas all had half-chances but the score remained level as the teams headed into the break with lot to ponder over.

The hosts lost Laldinpuia to an injury while Laxmikant Kattimani had to be replaced after he was clattered into by Sawyer, who was lucky to escape a booking in a tough half of football.

But it was Hyderabad FC who came out for the restart with their heads in front and it took just three minutes for Mohammad Yasir to find the bottom corner and unleash a trendy celebration.

This not only silenced an excited crowd, but also deflated the Jamshedpur FC players, who took time to get a foothold in the game in the second half.

Bart Ogbeche, who took a kick to his face, Borja Herrera, who came on at half-time, Joel Chianese and Halicharan Narzary all had decent chances to double Hyderabad FC’s lead but failed to make the most of it.

That set up a thrilling end to the contest, with Anuj Kumar, who came off the bench for Kattimani, giving away a cheap free-kick that started off an array of Jamshedpur FC attacks.

But Odei Onaindia, who was the Hero of the Match, Chinglensana Konsham, Akash Mishra, Nikhil Poojary, Joao Victor and Sahil Tavora, threw themselves around, and never gave the Red Miners a clear shot on goal.

Ishan Pandita probably missed the best chance of the half for the hosts, as Hyderabad FC toiled hard and held on to a one-goal lead, for the fourth game running.

Hyderabad FC have now kept five clean sheets on the run, a club record and a joint-ISL record, while also registering their fifth consecutive victory, keeping their place at the top of the league table intact.

They are back in action when they take on Kerala Blasters at the GMC Athletic Stadium in Gachibowli, Hyderabad in Saturday, November 19.

🔥 FULL-TIME and #JFCHFC ends in triumph!

The boys win all three points on our trip to Jamshedpur as @Mohammad_Yasir4‘s winner give us our first ever win over the Red Miners… 💪#WeAreHFC #మనహైదరాబాద్ #HyderabadFC pic.twitter.com/KhCE0or2hT