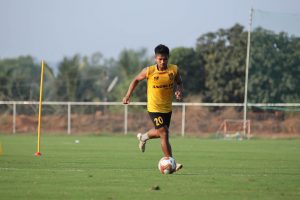 Hyderabad FC striker Lalawmpuia Ralte is set to join I-League side Sudeva Delhi FC on loan for the 2021-22 campaign.

The 21-year-old joined the club on a three-year deal last September and was a part of the first team for the 2020-21 Indian Super League campaign. A talented striker, Lalawmpuia is a natural finisher and was impressive in the pre-season under Manolo Marquez last year, and even made his ISL debut against ATK Mohun Bagan.

Sudeva Delhi FC are known to feature an all-Indian squad, and during his loan stint with the Delhi-based club, Lalawmpuia will look to gain experience in a competitive I-League coming up in Kolkata. Hyderabad FC will keep a close eye on his progress and wishes him the best for the upcoming season.