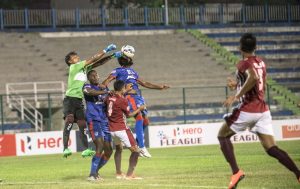 A heavily rested Bengaluru FC side finished their championship-winning I-League season with a disappointing 5-0 defeat to Mohun Bagan at the Kanchenjunga Stadium, in Siliguri, on Saturday. Having clinched the title a week ago at home and with a crucial AFC Cup fixture to play for on Wednesday, Ashley Westwood opted to roll out a team that had Sunil Chhetri, Eugeneson Lyngdoh, Rino Anto, Udanta Singh and Kim Song Yong on the bench, while John Johnson and Michael Collins weren’t part of the 18.

Bagan raced to a 4-0 lead in the first half with goals from Cornell Glen, Lenny Rodrigues, Luciano Sabrosa and Azharuddin Mallick before the striker from Trinidad completed a brace in the second half.

Glen gave Bagan the lead when he rose to nod home a chip from Sony Norde in the 8th minute, a goal the Blues defence should have done more to deal with. But just as the Blues looked to claw their way back from the early hiccup, a six-minute window of chaos saw the champions concede three more goals.

Bagan got their second in the 21st minute when Rodrigues placed a cut-back by Katsumi Yusa beyond Amrinder Singh. Yusa then turned up with two more assists – first for Sabrosa who rose to head home a freekick and then for Mallick who was at hand to head home from close after Glen mistimed his jump to meet a cross from the Japanese playmaker.

CK Vineeth looked like pulling one back for Bengaluru, doing well to control a long ball in the box before looking to put it past Arnab Das Sarma’s right. But the Bagan ’keeper was at hand, diving to make the stop.

While most would look at throwing in a fifth defender with a 4-0 score line, Westwood chose to bring on striker Daniel Lalhlimpuia for Thoi Singh as Bengaluru FC began keeping the ball a lot more from the start of the second half. But it took just six minutes into the restart for the Blues to be dealt a huge blow to after defender Keegan Pereira’s foul on Glen saw referee Ajitkumar Lairenlakpam show the Bengaluru FC player his second yellow of the night as Westwood’s side were reduced to ten men.

Glen picked his second goal of the night, getting on the end of a cross from Yusa to stab home in the 66th minute as Bengaluru focused on damage control. With the man advantage, Bagan tried to extend their lead but it wasn’t to be as it ended 5-0.

Blues’ Head Coach Ashley Westwood was named I-League Coach of the Year while Amrinder Singh, John Johnson and Eugeneson Lyngdoh picked up the I-League’s Best Goalkeeper, Best Defender and Best Midfielder Awards respectively. Skipper Sunil Chhetri was handed the I-League trophy as the Blues reclaimed the trophy in front of the traveling supporters.