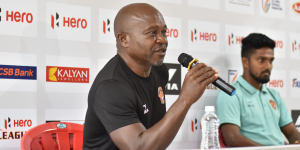 In a repeat of last season’s title-decider, Gokulam Kerala FC take on Mohammedan Sporting Club in the I-League 2022-23 opener at the Payyanad Stadium in Manjeri on November 12, 2022 at 4:30pm.

The title race went down to the wire last season with the Malabarians edging out the Black and White Brigade 2-1 at the Saltlake Stadium in Kolkata on the final day to lift their second consecutive I-League trophy.

It will be a different environment this time around as the league returns to its traditional home-and-away format. Gokulam Kerala can expect a capacity crowd in Manjeri to cheer them on as they begin their quest for an extraordinary third straight I-League crown.

“It will be nice for the players to finally play in front of the fans after two seasons. The players and staff have been eagerly waiting for tomorrow’s game,” said Richard Towa, Gokulam Kerala’s new head coach.

Vincenzo Alberto Annese parted ways with the Malabarians after winning two I-League titles in two years. His successor Towa is well aware of the high expectations from his fans. “In football, there’s always pressure. Gokulam Kerala have won the last two I-League titles and it will be a tough task this season as well.”

“Our preparations have been great. We’ve played a lot of friendly games with ISL teams and other Kerala clubs,” added Towa. 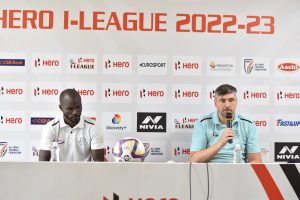 Mohammedan Sporting touched down in Kerala after having a positive pre-season, where they reached the Durand Cup semifinals in September before winning their second consecutive CFL title earlier this month.

“Our preparations for the I-League started in July. We did well in the Durand Cup and the CFL and also played many friendly games. We can’t wait for the season to start as the first game is always special,” said Mohammedan Sporting head coach Andrey Chernyshov.

Unfortunately, Mohammedan Sporting will miss the services of captain and last season’s Golden Boot winner Marcus Joseph in Saturday’s big game. “Marcus couldn’t travel with us here as he isn’t feeling well but we hope to have him back soon,” said the Russian.

As always, Chernyshov anticipates a tight encounter against Gokulam Kerala. “Gokulam (Kerala) are a really good team. They are two-time champions. Even though they’ve changed a lot of players and have a new coach, we’re expecting a tough game.”

The Mohammedan Sporting head coach concluded by expressing his delight with the return of the home-and-away format this season. “It’s very nice to have the supporters back. Football is different with fans. Playing inside a bio-bubble was very difficult. This season is going to be much more interesting as we get to play across the country.”