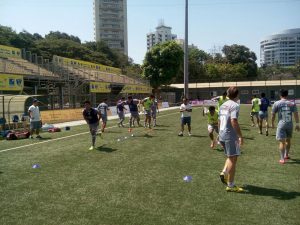 A very important test of the Hero I-League 2015-16 Season will take place between Mumbai FC and Shillong Lajong FC on Sunday at the Cooperage Stadium in Mumbai at 7pm. The match will be live streamed on www.I-League.org !

After the International Break, Lajong had done exceptionally well at home wining against Aizawl FC 3-1 and drawing their next match against Mohun Bagan 2-2. But things didn’t go down too well for Lajong and their “top four” hopes faced a major blow as the team was defeated 5-2 by Sporting Clube De Goa in Goa who are now occupying the 4th place which was previously occupied by Lajong.

Another setback the team went through was Brazilian striker, Uilliams Bomfin Souza receiving a double yellow in the game last Sunday. Hence the striker will miss the match on Sunday against Mumbai FC. Lajong will now have only two foreigners in the squad to face Mumbai FC in the form of midfielder Penn Orji and Striker Fabio Pena Henrique.

However, Coach Thangboi does not see this to be a problem as the team has been playing with only two foreigners in many matches. “It’s about consistency now. We must not concede silly goals. If we don’t concede we have a great chance to win as we have scored in all the last three matches”, said Shillong Lajong FC Head Coach Thangboi Singto.

Interestingly, Penn Orji who took over Captain Duties from an injured Aibor Khongjee scored two goals in his last game and marshalled the midfield along with Adinga. In fact, Penn is one of the fittest player’s in the league and is also the only foreign player who has played in every minute of the Shillong Lajong matches this year.

Also in the first leg encounter of the league, Lajong and Mumbai FC played out a goalless draw in Shillong on January 10. Overall on a head to head comparison amongst the two teams in the I-League, Lajong has beaten Mumbai thrice whereas Mumbai has managed to win once against Lajong. And the two sides have drawn once.

The last time Shillong Lajong FC played in Mumbai at the Cooperage Stadium was on the 3rd April in 2015 where Lajong earned a victory by a score line of 6-0.

But coming back to the present season, the Lajong gaffer believes that Mumbai is a strong team at home and said, “Mumbai FC has good players in all positions. We need to match with them in all departments for a positive result.”

“We must play not to lose and approach positively like we have done always. A win would be great.”

“We need to focus on the job at hand and not worry about what other teams are doing. We will play for a Win”, added the Lajong Head Coach.

Mumbai FC who started the I-League season on a bright note, is currently lying at the bottom of the table with 13 points while Lajong dropped to 7th with 15 points, after losing their last game.

Khalid Jamil’s side who arguably made good signings in the beginning of the season, has managed to win twice, draw seven times and lost five times so far in this season.

The Lajong side know what is currently at stake and hence will look to make the most from the game on Sunday. The young squad has played a good game of football this season and suffered a few slips but the team will go all out for a win with a strong determination, confidence and fighting spirit.