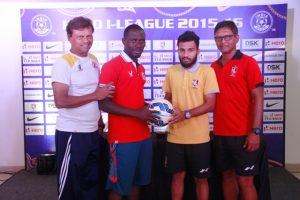 Newcomers Aizawl FC, fighting against relegation, go into Saturday’s game against the DSK Shivajians FC with the odds stacked against them.

Sitting 8th in the league table with 13 points, the highlanders play their final game of the Hero I-League at the Balewadi Sports Complex Stadium against the revamped DSK Shivajians, who are on a 7-match unbeaten run.

For the hosts, some solid performances away from their own backyard has increased the confidence in the dressing room and they would hope to sign off with nothing less than a win.

Impressive performances from their mid-season signings Juan Quero and Sandesh Jhingan have had a positive impact on the quality of football of Derrick Pereira’s team. The Ivorian Douhou Pierre upfront, have tallied for a stack-load of goals for this Pune-based outfit and this team that once looked hapless, are now proving to be a force to reckon with.

“In the start, many of our players were not used to each other’s playing styles, but as the season progressed, we grew as a team and our performances have improved. Even against Bagan, we didn’t lose heart and kept the belief going that we could come back with a positive result,” Pereira told in today’s pre-match press conference.

He also stated that he has a completely fit lineup and he will be fielding the best lineup possible. Nikhil Kadam also recovered from a treacherous knee injury and is back in contention and may feature against Aizawl FC tomorrow.

Visiting coach Jahar Das is confident ahead of this game and he has praised the quality of the opposition tomorrow.

“DSK Shivajians are also a new team like us and they have drastically improved over the course of the Hero I-League. Being a new team, it takes us time to adapt to the higher level of the teams and believe we have it in us to stay up and contest for the Hero I-League next season,” said Johar Das in the press conference.

There are a few injuries in the Aizawl squad, but all of them, according to the coach, are minor setbacks and he too has a full string of players to select from.

It is set to be an intriguing game as the two new Hero I-League debutants would face off for a shot at supremacy.

The encounter will kick off at 07:05 PM tomorrow and it’ll be aired live on Ten 2.