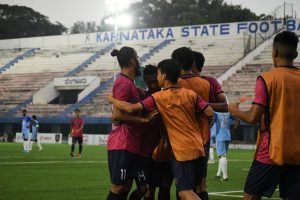 Rajasthan United FC downed Madan Maharaj FC with the help of two late goals from Surag Chettri and Harpreet Singh to secure a 2-0 victory in the I-League Qualifiers final round match here at the Bangalore Football Stadium on Wednesday, October 20.

The win gives Rajasthan United FC six points from their first two matches in the final round, placing the side in pole position to secure the coveted I-League spot with Kenkre FC close behind on four points. With no points on the board in the finals so far, Madan Maharaj FC have been eliminated from I-League contention.

Previous CAF Statement on the Women’s AFCON Qualifier: Equatorial Guinea vs DR Congo!
Next AIFF to livestream the India U-23 qualifiers from the UAE!