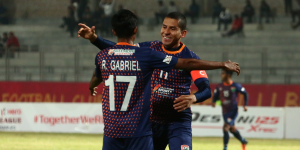 With nine rounds completed, the 2022-23 I-League season will recommence following a two-week winter break. Sreenidi Deccan FC finished the year at the top of the pile with 19 points, two points ahead of RoundGlass Punjab FC, who have a game in hand. Things are pretty tight overall too, a mere five points separating as many teams at the top.

Seven of the last eight I-League seasons have been decided on the final day, and it’s no surprise to see a similar pattern evolving this time around too. The return of the home and away format, coupled with the prize of promotion, has led to more excitement this season. As we restart, here’s a look at how each team’s season has panned out so far.

In only their second season in the I-League, Sreenidi Deccan have become the team to beat in the I-League. Led by captain and league top-scorer David Castañeda, the Deccan Warriors have notched six wins so far — three of those coming at their newly-built Deccan Arena.

After going down 1-2 to RoundGlass Punjab in their season opener, Carlos Vaz Pinto’s side responded in fantastic fashion to pick up four straight wins, in the process scalping last year’s top two — Gokulam Kerala and Mohammedan Sporting. Conceding late goals in successive games against Real Kashmir and Aizawl saw them drop five points before a Castañeda hat-trick away to Sudeva Delhi brought them back on track.

With 18 goals, the Deccans are I-League’s highest-scoring team so far, but 12 goals conceded are a cause of concern for coach Pinto. Two clean sheets to wrap up 2022 might be a sign of a better defensive showing to come in the new year.

Staikos Vergetis’ RoundGlass Punjab side is built on a rigid defence, and close encounters have been a theme this season. All five of their wins have been by a one-goal margin, with Slovenian striker Luka Majcen their most important player, netting in all four home wins.

The Panchkula-based side picked up ten points from their first four matches for a near-flawless start to the campaign before a 0-2 loss to TRAU in Imphal ended their unbeaten run. But RoundGlass Punjab had the perfect comeback in the bag as they edged out Real Kashmir 1-0 to become the first team to emerge victorious in Srinagar. A subsequent 1-0 success against defending champions Gokulam Kerala ensured they ended the year in second place with the top spot within their grasp.

Real Kashmir FC’s new era under Mehrajuddin Wadoo kicked off in the best possible manner as they set the early pace with five wins in the first six games. Roared on by their vibrant home fans, the Snow Leopards were unbeaten in their first five matches at the TRC Stadium, highlighted by spirited comeback wins over TRAU and Sreenidi Deccan FC.

However, the last home game of the year against RoundGlass Punjab ended up a disaster as nine-man Real Kashmir suffered their first defeat of the season. They were unable to recover from that setback and followed it up with back-to-back away losses to Mohammedan Sporting and Mumbai Kenkre. January will be key for Wadoo, as five away matches in a row could be testing for his side.

Gokulam Kerala’s bid for a third straight I-League title hasn’t exactly gone to plan. Four wins and seven goals in nine matches saw their Cameroonian head coach Richard Towa replaced by Spain’s Francesc Bonet during the winter break. On the positive side, Gokulam Kerala can boast the best defensive record in the league, with just three goals conceded — none at home.

Finding consistency will be one of Bonet’s big challenges, as Gokulam haven’t managed to string together more than two wins in a row. The Malabarians have also struggled on the road, collecting just two points in their last four away matches since beating Aizawl in the second round.

After finishing sixth in their debut campaign last year, Rajasthan United have been in decent form this season too, sitting in fifth place and five points behind leaders Sreenidi Deccan. The Desert Warriors have registered two wins each, home and away, but all three of their defeats have come on the road.

Head coach Pushpender Kundu should be pleased with the variety of goal-scorers, as his side’s ten goals have been scored by seven different players. Like Gokulam, Rajasthan United will hope to be more consistent and will be helped by a favourable schedule in the new year with six home fixtures in a row.

TRAU have had a mixed bag of a season so far, with four wins (all at home) and four losses (all away). The Red Pythons are the only team with a 100 percent home record, but just one point from five away trips sees them stuck mid-table.

One of TRAU’s best moments was Godfred Yeboah’s 96th-minute winner in their 2-1 derby win over city rivals NEROCA. Conversely, the 1-6 hammering at the hands of Churchill Brothers in the last match before the break was a result to forget. All in all, TRAU’s season has been defined by their captain Komron Tursunov, who has played a crucial role with five goals and three assists.

Two-time I-League champions Churchill Brothers had an underwhelming start to the campaign with just two points in their opening five matches, leading to the departure of Spanish coach Antonio Rueda. Under assistant coach Mateus Costa’s temporary charge, the Red Machines have turned things around, bagging three wins in the last four games, including a 2-1 victory over Mohammedan Sporting and a 6-1 drubbing of TRAU to sign off the year.

For the remainder of the campaign, Churchill have brought back coach Fernando Santiago Varela, who guided them to a second-place finish in the 2020-21 season. The Goan side’s rich vein of form heading into the new year might make things easy for the Spaniard as he returns to his old job.

The 2016-17 I-League winners have been lingering in mid-table this season, with three wins, draws and defeats each. The People’s Club began the campaign under head coach Standly Rozario, who had to leave after just three games in charge due to health reasons.

It’s been a season of fine margins for Aizawl. All three of their losses have been by a one-goal margin, and the story could’ve been different had a few key moments gone their way. They have also shown good fighting spirit, coming from behind to draw three times — the highlight a 98th-minute Emmanuel Makinde equaliser away to Sreenidi Deccan with ten men.

Under new coach Caetano Pinho, Aizawl have a similar target as many other teams — to register an away win, as all three of their victories have come at the Rajiv Gandhi Stadium.

After heavily underperforming in the current campaign, last season’s runners-up Mohammedan Sporting let go of Russian head coach Andrey Chernyshov in mid-December. Currently languishing in ninth spot, just four points above the relegation zone, the winter break may have come at the right time for the Black and White Brigade, with former Mohun Bagan coach Kibu Vicuña set to take charge for the rest of the season.

Ten of Mohammedan’s 11 points have come at the Kishore Bharati Krirangan, meaning their struggles have almost entirely been on the road. Failure to hold onto a lead is something Vicuña will need to rectify, as his side has won only three out of six matches in which they’ve gone ahead.

Playing their first I-League season in the City of Dreams, Mumbai Kenkre have produced a reasonably good campaign. With almost entirely an all-Indian squad at their disposal, the Mumbaikars are putting on a much-improved show than last season when they finished rock bottom.

Barring a couple of heavy losses away to TRAU and Aizawl, Mumbai Kenkre have been fairly solid at the back, coming out with creditable draws against the likes of Gokulam, Churchill and Mohammedan. But Akhil Kothari’s men reserved their best display for the last match of the year, coming from behind to beat Real Kashmir 2-1 in front of a lively crowd at the Cooperage Stadium, lifting themselves to tenth place, three points clear of the relegation zone.

NEROCA have been one of the surprising teams of the season, for the wrong reasons though. Few expected them to occupy the drop zone with just two wins. Although the Orange Brigade have the fourth-best defence in the league, they have struggled in front of goal, netting just four so far.

Having failed to score in four of their last five games, head coach Wangkhem Khogen Singh — who held his side’s poor finishing liable — will hope to fix their lack of goals in the new year. Notably, NEROCA have played only three matches at home so far and will look to collect significant points when they play their remaining home games in the second part of the season.

Absolutely nothing has gone to plan for Sudeva Delhi this season. Seven defeats in a row to start the season, four of those by a margin of more than one goal, led to the departure of Japanese head coach Atsushi Nakamura. Former Mohun Bagan and Mohammedan Sporting coach Sankarlal Chakraborty has taken up the reins for the remainder of the campaign as the capital-based side hope to complete a miraculous turnaround to avoid relegation.

The Chakraborty era started positively as Sudeva Delhi procured their first point of the season in a 1-1 draw against Mohammedan Sporting in the last match before the break. But the gap to safety is still nine points, and with just 14 games to go, every matchday will be like a final for them.