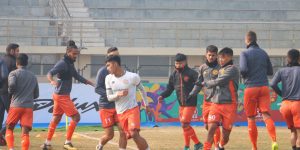 The I-League match against Kenkre FC here at Tau Devi Lal Stadium on Saturday will be a golden opportunity for RoundGlass Punjab FC to claim the top spot on the table. They are just two points behind leaders Sreenidi Deccan FC but Staikos Vergetis’s men have played two matches less. Kenkre are third from the bottom right now, with ten points from as many matches.

As RoundGlass Punjab FC showed the other day against NEROCA FC, they are a resilient side with deep reserves of energy. Just when an inexperienced but energetic side like NEROCA was pushing them hard, RoundGlass Punjab upped the ante to emerge winners. Considering that, grabbing full points against Kenkre should not be a problem. However, Punjab coach Vergetis insisted on Friday, “I’m not looking at the table at this time. I’m just focussing on one game at a time.”

Midfielder Ajay Chhetri echoed the words of his coach. “It’s a competitive league, so even tomorrow we should expect a tough game. We can’t relax,” he commented. “It was good to start the New Year with three points and hope we get three more on Saturday.”

Uncertainty is the only certainty in sport and as the I-League approaches the second leg, every match becomes crucial. Teams sitting pretty since the beginning can deteriorate, sides languishing at the bottom can script a turnaround. That is the beauty of season-long leagues. Kenkre FC coach Akhil Kothari hopes something like that will happen in the second half of the league. “We know that we can be competitive against good teams,” he said on the eve of the match. “Only thing is we haven’t been able to obtain three points as frequently as we would have liked.”

“But going forward, given the kind of work we have put in, I’m sure we’ll be able to put some points on the table,” he added.

Kothari’s hopes may not be unfounded as his team did put up a tough fight against league leaders Sreenidi in their last match. Kiran Pandhare & Co. conceded an early goal in the 19th minute but did not disintegrate thereafter. They even had seven attempts at Sreenidi’s goal even though only one was on target.

RoundGlass Punjab FC had a more competitive match last time round, which could actually help them. Luka Majcen, Brandon Vanlalremdika, Pranjal Bhumij – everyone looked in fine fettle after the break. However, Majcen had to be withdrawn in the second half with a niggle. The defence consisting of Deepak Devrani, Huidrom Naocha Singh and captain Aleksandar Ignjatovic looked as solid as they were before the winter break. However, Vergetis indicated some changes are likely in the starting line-up as they have to play another match in a short time.