I-League: Salgaocar’s Duffy scores to win it against Aizawl FC 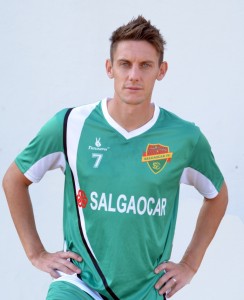 In a crucial fight to avoid relegation, Aizawl FC played host to Salgaocar FC at the Rajiv Gandhi Stadium. The match ended with a 1-0 scoreline in favour of the visitors with Darryl Duffy scoring a goal through a free kick in the first half.

The game kicked off with the home side attempting to attack relentlessly sans the finishing panache. After a few minutes, Salgaocar FC made a cunning attacking move but Darryl Duffy’s pass towards Jackichand Singh was too heavy.

The first goal of the match was scored in the 32nd minute by the prolific Scottish striker Darryl Duffy, eventually his eleventh of the season. He stepped up to take a free-kick outside the box and rattled the back of the net after parrying across the Aizawl FC wall and Lalawmpuia.

Duffy was cautioned eight minutes later when he had a little outburst after the referee did not foul Aizawl FC defender Lalruatthara after their collision.

With a lead to boast of, the Goan side made their game more defensive to avoid conceding a goal. Though both sides made moves at their attacking fronts, no goal was scored after that. The only goal scored by Darryl Duffy made the difference between the teams on the halfway mark.

The second half began with Duffy almost doubling their lead through an immaculate shot within the box after his side made a counter-attack but it was well blocked by Lalchhawnkima.

Since then, Aizawl FC made every possible effort to net the equalizer but the Salgaocar FC defenders carried out a stupendous job to thwart them. The Aizawl side continued to pressurize Karanjit Singh with myriads of shots that put the lead of the Goan side in the backfoot but the hommies failed to convert those chances.

Lalramzauva Khiangte, who came in off the bench, made a striking shot which went over the bar towards the end of the game. Lalruatthara and Martin Scott were cautioned in the eighty-second minute following a tad scuffle.

The goalkeeper of Salgaocar FC Karanjit Singh walked away as the Hero of the Match for his excellent display today.
Post the match, Karanjit Singh expressed his satisfaction, “I am very happy and satisfied. I used my experience at the right time. I believe we are now safe from relegation.” However, he also added, “We will not sit and relax in the next two matches.”

Jahar Das, the head coach of Aizawl FC admitted, “We made mistakes today but we will try our best to win the next match.”

After the win, Salgaocar FC jump to fifth spot with 16 points from 14 games whereas Aizawl FC are placed eighth with 13 points having played one match more.