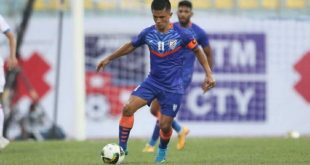 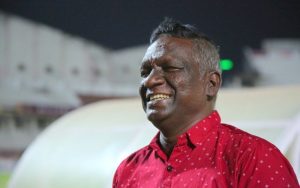 There has been much fanfare around the 75th National Football Championship for the Santosh Trophy this season, with fans flocking to the stands in Malappuram, Kerala. The return of the prestigious competition has wowed one and all, including Blue Tigers legend I.M. Vijayan.

The Santosh Trophy is all set to enter the semifinals stage, as the likes of Manipur, Karnataka, West Bengal and hosts Kerala enter the business end of the competition. I.M. Vijayan, who is celebrated across the country as one of its greatest footballers, was amazed by the fanfare around the tournament.

“There have been so many fans that have come to enjoy the matches as Santosh Trophy is being held in Malappuram for the first time. Kerala is known for its football fans, and the local people have shown that by arriving in huge numbers,” said Vijayan. “Kerala fans are different, they are special. I have seen them support me even when I played for Mohun Bagan against Kerala Police. I have also played for Bengal and missed a penalty in a tie-breaker against Kerala back when Sathiyan (VP) sir was the captain. Kerala lost that match, but fans here still recall that game.”

Vijayan, who has himself played in the Santosh Trophy for both West Bengal and Kerala, feels that it is a perfect platform for the players to showcase their talent and get picked up by clubs.

“All the players have a chance to prove themselves, especially the ones that have made it to the semifinal so far. This is one of the most prestigious tournaments in India, and they will be trying to prove themselves and catch the eyes of the top clubs,” he stated.

The coaches at the Santosh Trophy also heaped praises on the organisational aspect of a tournament that has seen fans thronging the stands.

“I was very surprised at the way the tournament has been organised. The Kerala Government, the KFA and the AIFF have given a wonderful platform to young players and coaches,” said Gift Raikhan, whose side Manipur is set to face West Bengal in the semifinal. “It’s professional and punctual, and the infrastructure in Kerala has been spectacular.”

West Bengal coach Ranjan Bhattacharjee was amazed by the reception his side received in Kerala.

“I think it’s been wonderfully organised. From the very first day we came to Kerala, the way the accommodations have been made and the way we were received by the hotel staff, left an impression,” he said. “Apart from that, the quality of the facilities that were arranged for us was wonderful.”