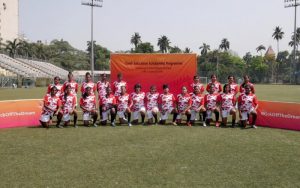 The Local Organising Committee (LOC) of the 2022 FIFA U-17 Women’s World Cup – India organised its inaugural D-License edition of the Coach Education Scholarship Programme at the Cooperage Stadium in Mumbai between April 25 to 30, 2022.

22 participants from across Maharashtra, including 9 from LOC’s previously conducted E-License scholarship programmes, participated in this course which imparted both, practical and theoretical aspects of football coaching.

“The inaugural edition of the D-License Coach Education Scholarship Programme was another step in leaving a lasting legacy of the 2022 FIFA U-17 Women’s World Cup – India. This programme has already helped 116 women achieve their E-License football coaching certification and they are making a positive impact on the women’s football ecosystem of India by helping young girls take up football at the grassroots.

“The participants, some of whom were part of the previously conducted E-License programmes, were enthusiastic in taking this next step in their coaching careers and showed great appetite for growth. We remain thankful to our stakeholders who share a common vision of accelerating grassroots development and promoting more women to leadership roles,” said Nandini Arora, Project Director, LOC FIFA U-17 Women’s World Cup India 2022.

The D-License course, which is a progression from the E-License, was executed with support from FIFA, the Western India Football Association (WIFA), and other stakeholders who remain committed in providing a pathway for aspiring coaches to enter the grassroots of women’s football and guide young girls from the local community who dream of playing football.

The Coach Education Scholarship Programme, which is nurturing female coaches at the grassroots and instilling in them leadership qualities, began with its maiden edition on International Women’s Day on March 8, 2020 in Mumbai. Thereafter, four more editions were held in Pune, Kolhapur, Delhi and Thane, respectively, before the latest edition in Mumbai.