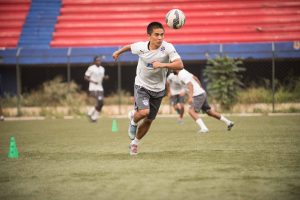 Bengaluru FC today, June 9 announced the extension of Sunil Chhetri’s by one-year deal that keeps the club’s top scorer with the Blues till the end of the 2016/17 season. The India and Bengaluru FC skipper spent two seasons with the I-League champions before signing with ISL team Mumbai City FC and returning to BFC on loan last season and leading the club to a second I-League crown in three seasons.

“We are pleased to announce Sunil as a BFC player in what will be his fourth season at the club. I don’t think we need to be vocal about what he brings to the club and the kind of impact he has in the dressing room and outside of it. He’s been a top professional and leads the team by example and we feel he has a lot more history to script with Bengaluru FC,” said club COO Mustafa Ghouse.

Chhetri finished top scorer for the club for the third successive season taking his tally across all competitions in a BFC shirt to 35. His brace against Kitchee FC in the AFC Cup Round-Of-16 game in Hong Kong last month sparked a comeback from a goal down as Bengaluru FC carved a bit of history to make it to the quarterfinal to be played in September 2016.

“I’ve always said BFC is family to me. We’re doing some amazing things at this club and I’m delighted to pen this deal. We’ve had a brilliant season and I’m really looking forward to build on it with the team. The fans, management, staff and dressing room have all made me feel at home from the day I stepped in to Bengaluru and there’s a connect with this city that is special,” said Chhetri.