India coach Constantine: The situation is fantastic for Indian Football! 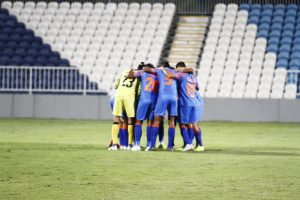 Indian National Coach Stephen Constantine who has always been vocal in “building the team for future”, stressed that he believes in the “ability of his players, and not their age”. For the record, India are fielding the second youngest side in the forthcoming 2019 AFC Asian Cup with an average age of 25.

“I never differentiate between seniors and juniors. They are all playing for India. I’m not interested in their ages, but their abilities. Our average age is about 25. The situation is fantastic for Indian Football where we can foresee a team for the next 10 years,” he stated, the morning after India played a goalless draw against mighty Oman in an International Friendly.

“After this tournament, we’ll have a young Indian squad with an experience of playing in an Asian Cup,” he added.

Referring to the match against Oman he explained that the “boys worked very hard.”

“It was a very good game for us. Oman were a very difficult opponent and have been unbeaten in the last 12 months. The boys worked very hard and I’m very pleased with the positive result,” the coach commented. “It was phenomenal from the work-rate perspective. The numbers are exceptional. We were superb physically.”

Oman headed into the match on a 12-match-unbeaten-run which included victories against the likes of Kuwait, Palestine, Bahrain and even world-cuppers Saudi Arabia.

With almost 27 percent of the population in UAE being Indians, the Blue Tigers are expected to get a vociferous cheer from the stands when they begin their campaign in the Asian Cup.

“There’s no pressure on us. Four years before no one expected us to qualify. After we qualified everyone was thinking that we are going to lose the three games. It’s up to us to prove that we deserve to be here.” Constantine maintained.

Indians did create a few opportunities against Oman but eventually failed to capitalise. The Coach, currently serving his second tenure with the Blue Tigers, felt the team “needs to look after the ball better, and take those chances.”

The Blue Tigers kick-off their 2019 AFC Asian Cup campaign against Thailand at the Al Nahyan Stadium in Abu Dhabi on January 6, 2019. The match is slated to kick-off at 7pm IST.