India lose 0-4 to Saudi Arabia, out of AFC U-19 Championship qualifiers! 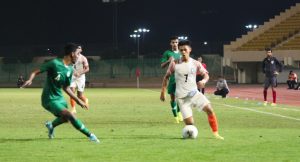 India bowed out of the race for the 2020 AFC U-19 Championship qualifiers after a 0-4 loss to hosts Saudi Arabia on Friday, November 8 at the Prince Saud bin Jalawi Stadium in Al Khobar.

The home side opened the scoring in the second minute as forward Mohammad Khalil Marran latched on to a loose ball and put it past Indian custodian Prabhsukhan Singh Gill, despite the latter’s best efforts.

Saudi Arabia made it two in the 10th minute as midfielder Ahmad Albassas got on the end of a cross from the left flank by Hazzaa Alghamdi.

As head coach Floyd Pinto’s side pushed forward to halve the deficit, Albassas scored his second of the game after being put through on goal with a through pass in the 18th minute.

He completed his hattrick in the 28th minute, once again converting a low cross from the left flank as Saudi Arabia broke forward in numbers on the break.

Ninthoinganba Meetei posed problems throughout the first half for the hosts down the wing with his pace and guile, earning multiple free-kicks from attacking positions.

He came closest to scoring for the Indians two minutes before the half-time break, as he struck a powerful shot from the edge of the penalty area that rippled the side netting – going just wide of the post.

India made a personnel change at the break – with Manvir Singh coming on for Ricky Shabong. The former almost made an instant impact as he raced towards the by-line down the right and put in a cross that just evaded Vikram Partap on the far post in the 47th minute.

The hosts looked to extend their lead and created a few chances but Gill in goal dealt with them – showing some good handling under pressure.

Floyd Pinto’s side played with more composure in the second half and posed threats for the Saudi defence, with Ninthoi leading the charge and drawing fouls from the opposing defenders. However, the Indians could not find the back of the net after breaking into the attacking third on numerous occasions.

The first game of the day had seen Uzbekistan register a 2-0 win over Afghanistan. In their final group stage match, India will face Afghanistan at the same venue on Sunday, November 10 at 5.35pm IST.