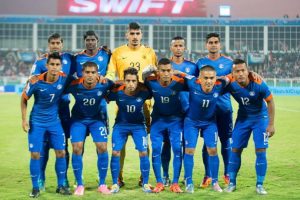 But Stephen Constantine currently only has 22 players in the camp with Mohun Bagan and Bengaluru FC players still busy with their AFC Cup pre-quarterfinal playoff commitments.

The Players from Mohun Bagan (Pritam Kotal, Pronay Halder, Jeje Lalpekhlua) would report to the Camp on the morning of May 25 while Bengaluru FC players (Amrinder Singh, Keegan Pereira, Rino Anto, Allwyn George, Udanta Singh, Eugeneson Lyngdoh, Sunil Chhetri) would be assembling at the camp on the morning of May 28, but C.K. Vineeth won’t report to the camp due to a sustained injury while goalkeeper Gurpreet Singh Sandhu would join Team India directly in Laos from Norway.

A final squad of 23 player would be flying from Delhi to Laos on May 30 morning.