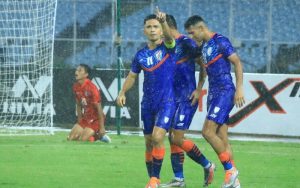 The Indian National Team camp was all smiles and satisfaction after the Blue Tigers earned their second consecutive qualification to the AFC Asian Cup. This will be India’s fifth appearance at the Continental Championship. But at the same time, they are not willing to bask in glory, and insist that the “real work begins now.”

“The feeling in the whole team is unbelievable, and it’s because of the manner we performed in each game. All the 3 games demanded a different approach, and we managed to do it. However, the real work begins now, as we aim to do better than the last time. The sky’s the limit for these boys,” Sandesh Jhingan averred.

Striker Ishan Pandita who scored his first International goal wasn’t willing to part with the ball post match. “It is an exceptional feeling to score your first goal for the country. I hope that it is the first of many. The ball will be my pillow, and this jersey will be my pillow cover,” he smiled.

There was also another Blue Tiger who scored his first-ever International goal in the match against Hong Kong. “This is a feeling which I can’t describe,” central defender Anwar Ali beamed, as his eyes turned moist. “A qualification to the Asian Cup, my first international goal, and it came in front of such a passionate crowd. I am speechless,” he added.

His partner, and senior pro Sandesh Jhingan labelled Anwar as a “great guy.”

“We have known each other for many years. He is a very humble boy, and the mentality he has is unbelievable. Keep dreaming, keep pursuing the dream of playing football. I have massive respect for him,” Sandesh uttered.

Liston Colaco stated that the “target has been achieved, and there are bigger targets to achieve.”

“We have been aiming for this since the start of the group stage. We have achieved our target, and credit goes to the coach for being patient, and working with us on the training pitch. A back-to-back qualification is immensely significant for Indian Football. It’s now time to work harder for bigger targets.”