India U-14 boys lose 0-1 to Afghanistan in AFC Festival of Football! 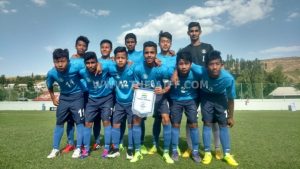 The Indian Under-14 Men’s National Team went down fighting 0-1 against Afghanistan in their second match of the AFC U-14 Festival of Football in Dushanbe, Tajikistan earlier today.

Coming on the back of a 3-1 win over Kyrgyzstan in their opening match, the Indian U-14 Men’s Team dominated possession and showed conviction in attack. But were left reeling as chances fostered never saw the light of day.

Changing over and Afghanistan took the lead in the 58th minute as they scored against the run of play, following a counter attack which caught the Indian defence napping.

The Indian colts pressed hard for the equalizer but were unable to earn dividends as the full-time scoreline read 0-1 in favour of Afghanistan.

The Indian contingent clashes swords against Iran and Nepal next on Sunday, May 29 at 10:30am IST and 6pm IST respectively.