India U-15 Girls’ Alex Ambrose: The good work must not stop! 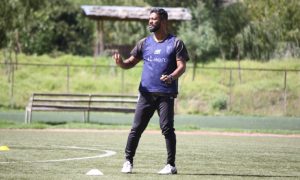 After booking their spot in the final of the SAFF U-15 Women’s Championship 2019, India head coach Alex Ambrose feels that in their next match against Bangladesh on Sunday, October 13, his side needs to keep executing the good work that they have been carrying out in the last two games.

“We need to ensure that our good work does not stop. We need to keep executing the same ideas, the same process,” Ambrose said.

India are currently riding high on the back of a 10-1 victory over hosts Bhutan at the Chalimithang Stadium in Thimphu, on Friday, October 11 and are placed atop the points table with six points.

Bangladesh have also won their two matches and are behind India on goal difference. While the last group stage match would essentially be a dead rubber as both the teams have qualified for the final, Ambrose believes that his team needs to continue working hard.

The gaffer also went on to state that Bangladesh are a technical side, but consistency in effort can push the Indian girls through against them.

“We need to take all the positives from this game into the game against Bangladesh, who are a very technical side. They have some very good players in the team,” said Ambrose.

However, the Bhutan win has given a lot of boost to the team, who, according to Ambrose, are “high on confidence” after such a massive victory.

“We had a good win against Bhutan. We played according to the plan, maintained possession, created chances, and took them. I’m sure the girls are high on confidence, and that’s what we want for their future development,” quipped Ambrose. “This kind of thought and effort needs to continue, and we just want to be consistent throughout the tournament.”

India are slated to take on Bangladesh in the penultimate group stage match of the SAFF U-15 Women’s Championship 2019 at 2.30pm IST on Sunday, October 13. The match will be streamed live on www.mycujoo.tv.