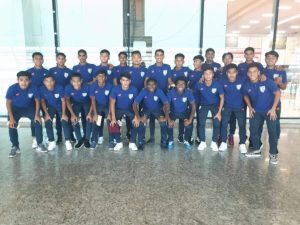 India U-15 National Team coach Bibiano Fernandes is expecting a string of “good competitive matches” in Thailand when the Blue colts travel to the ASEAN country for four preparatory matches before the AFC U-16 Championship qualifiers in September this year.

“Our objective of going there (Thailand) is to test ourselves against some quality opponents before the big test in September. The boys have been impressive so far as we have gotten some positive results of late. Now, it’s the time to test ourselves and these good competitive matches would be the right platform for the boys,” Fernandes said before the team leave the Indian shores for Bangkok.

The India U-15 colts are pitted to face Bangkok Glass FC on July 30 in their first match followed by three other matches against Muang Thong United (August 4), Chonburi FC (August 6) and Assumption United FC (August 9) respectively.

Bibiano Fernandes rated the Thai teams highly, saying, “Two years back, we had played a couple of friendly matches against Thai clubs and they were really helpful for our preparation. They are technically very sound and we can’t expect anything less than a tough competition this time too.”

“Our preparation is going according to the plan. The team is shaping up well although we require fine-tuning closer to the qualifiers. A few boys who have had a good outing in the Hero Junior Youth league have joined after the exposure trip to Italy. Theis inclusion has strengthened the team further,” Fernandes added.

The team’s fixtures are as follows: