Press Release 2021-03-07 I-League, Team India Comments Off on India U-16 trio moving forward together in the I-League with Indian Arrows! 264 Views 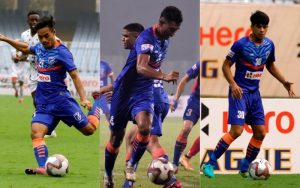 The Indian Arrows produced a clinical display on Saturday, March 6 to defeat NEROCA FC 3-0, with defender Halen Nongdtu picking up the Hero of the Match award for a rock-solid display at the back. Along with Halen, the Arrows starting XI featured midfielder Loitongbam Taison Singh and defender Amandeep – with the trio being a part of the India U-16 national team that played four exposure matches in UAE earlier this year in January.

On their return, they joined the Indian Arrows set-up in the I-League and have gone from strength to strength after taking their respective bows at the senior level. Talking about his experience so far, Halen stated that the Indian Arrows is a ‘great platform’ for players like him to further their development.

“Playing in the I-League is a big change for us as we are getting to play against senior professionals and foreigners. Coming from junior football to this level is a huge step up and here, it is much more physical and there is a lot more pressure with every match. However, we are learning and improving every day and I feel that this is a great platform for young players like us,” he shared.

“Adapting to this level has been a challenge but thanks to the exposure and matches against top-quality opponents that we have received in the last few years, we have been able to make the transition smoothly. Training with the Arrows and playing in the I-League is really helping us a lot and we are all grateful for this amazing opportunity,” the 17-year-old Halen opined.

Indian Arrows head coach Venkatesh Shanmugam spoke about how the young guns have ‘adapted well’ to the I-League challenge with support from all the players.

“The three boys from the U-16 national team have adapted well to our system and made the step up to the I-League confidently, with support from the whole squad. The maturity they have shown is impressive.”

“Naturally, there is a lot that they have to improve upon but the initial signs are very good. The experience they had gained from the recent international matches has been key.”

“The Arrows is a long-term development programme and playing in the I-League is an important step in the team’s preparation for 2022 AFC U-19 Qualifiers. It is great to see the pool of talent we have. The boys are progressing well and I am looking forward to more positive displays in the coming games,” he said.

Another member of the U-16 national team who made a mark on Saturday in the I-League was Sudeva Delhi FC forward Shubho Paul, who wore the captain’s armband and led his team to a comeback win over Chennai City FC. At 17 years and 2 days old, he became the third-youngest captain in the league’s history and already has a goal to his name at the senior level.

Shubho and the Indian Arrows trio have been a part of the AIFF youth development programme for the last few years under coach Bibiano Fernandes, and all four played important roles in India’s SAFF U-15 Championship victory two years ago. Bibiano mentioned that it is ‘heartening’ for him to see his wards excel and hold their own against senior opposition.

“It is certainly very heartening to see these young boys do so well in their debut season at the senior level. They have grown a lot in the last few years with the exposure and experience they have gained by playing against top-level opposition and the I-League is a great opportunity for them to keep going onwards and upwards,” he quipped.

“I have been following their matches in the I-League and it makes me very happy to see them do well for their teams. This is the next step in their development process and I hope they keeping moving forward with every game and reach their full potential,” an optimistic Bibiano averred.