India U-19 Floyd Pinto: We had our chances against France! 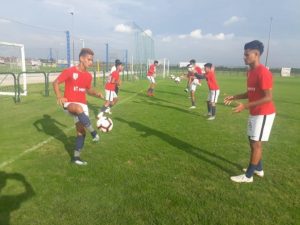 After the Indian U-19 National Team went down 0-2 against the U-19 Youth Team of World Champions France, Head Coach Floyd Pinto stated that matches against superior opponents are pivotal in development of a team. “I am happy with the Team’s performance in the Four-Nation International Tournament,” he stated.

“The boys stood firm and restricted a far superior opponent for most of the match. Considering some of the French players are playing in French Lige 1 and Elite Academy, our boys did a brilliant job. They proved that they belonged on the same pitch as their elite opponents. In fact, we had our chances – Aniket’s chance from 25 yards out almost gave them a scare,” he added.

A goal in each of the two halves helped France to win it 2-0.

“In such matches, it is imperative that we defend well. The two goals we conceded came from minor errors. We need to work on that aspect,” he quipped.

The Indian U-19s had earlier lost by a late goal against Slovenia (0-1) and had gone down 0-5 to Croatia in their first match.

“All three games were against high quality opponents, preparing for the Euro U-19 2019 Qualifiers. I am extremely proud of my boys.”

“Looking back, we were unable to take our chances, especially those against Slovenia. The only blip was the first half against Croatia where we conceded a lot of goals,” Floyd maintained.

“These game help to raise the standard of play and I am thankful to the Ministry of Youth Affairs and Sports, SAI, the AIFF General Secretary and the AIFF Director of National Teams for giving us this chance,” Floyd stated.

The Indian U-19 National Team will now depart for Serbian shores where the Colts will clash against the U-19 Team of Serbia in two back-to-back International Friendlies on September 13 and September 17.

“Serbia will be another challenge and we are hopeful about craving out a win. Those matches will further help us in our preparation for the season ahead.”