India Youth Coach Nicolai Adam: We need to avoid mistakes on the field! 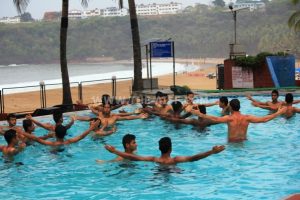 The morning after at the Team Hotel, Coach Nicolai Adam in his shorts waves to his boys and the boys follow him like the Piped Piper of Hamelin. “Come on boys,” as he steps into the Swimming Pool. The sea of talent follows. The Coach leads by example.

The Arabian Sea, barely some 50 meters away, spurred on by the breeze and maybe by the dark clouds overhead, thunders with all its might on the sand. “The Sea is most dangerous at this time. Monsoon is to arrive soon. It just washes the sand away,” quips a local.

At the Pool, the boys wash away their tired limbs at the recovery session.

Goa at this time of the Year is hot and humid. “But we don’t have any problems playing in this heat,” Nicolai declares to AIFF Media. “We did our training sessions in Goa in the last five weeks in the heat. It’s not a problem,” he adds, and only after a brief pause spreads his hands around, smiles and says” It’s much cooler today.”

The overnight rain had an effect early morning in Goa but with the Sun at his scorching rage as the day progressed, it has turned out more humid.

Did you have a look at Tanzania?

“The boys look a lot like the Players from South Africans when we played there. They are tall but not muscular. They played a very good match against USA. It will be another hard day for us,” he maintains.

Tanzanian Coach Bakari Shime, also insists, that it will be a “hard match” against India. “India are the hosts. The hosts are always the strongest. On top of that, India have been preparing so long. It will be a hard game,” he says in one breath.

“India were physically fit and better than us. They had momentum with which they attacked and it cost us. Their wingers were very impressive,” he had uttered at the Official post-match Press Conference.

Nicolai, nevertheless, speaks of what is more to be done. “We also have to be critical of ourselves. A 2-2 draw is not enough for what we have to play in the future,” he asserts. “The boys made too many mistakes. We need to avoid that. That’s how I see it, especially when you are the better Team on the field. You just can’t afford that. So we need to improve on that aspect,” he informs.

The roar of the waves prompt you to take a glance to the Sea. The Beach, despite “being cool,” is almost empty.

“Coming back from 0-2 is quite good. I feel the spectators liked the spectacle. We hope more people come to the ground to cheer for us.”