Indian Arrows aim to end IWL campaign with a win against Kickstart FC!

Press Release 2022-05-25 Women Comments Off on Indian Arrows aim to end IWL campaign with a win against Kickstart FC! 206 Views 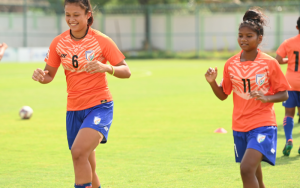 AIFF’s developmental side Indian Arrows hope to finish the Indian Women’s League with a winning momentum when they take on Kickstart FC in the last game of the season tomorrow at the Capital Ground.

Ahead of the encounter, Indian Arrows’ head coach Suren Chhetri opined, “Kickstart is one of the best teams in the IWL and they have already secured a third place in the table. They also have good experienced players.”

He believes, “There’s no such pressure but if we win, that is good for the young players.”

Quizzed about his thought on the Indian Arrows campaign this season the gaffer said, “It has been a successful season in my opinion. I’m proud of these girls who have put in a lot of effort and happy to see some players progressing.”

Kickstart FC is determined to maintain its dominant display when they take on Indian Arrows. The Karnataka based side has sealed the third spot in the league table with 24 points from 10 matches.

The head coach Amrutha opined, “This season was very positive for us, our girls shows a good fighting spirit in this entire season and we made a number of thrilling victories. We want to thank AIFF for successfully organizing the tournament.”

Speaking on the game ahead she said, “Indian Arrows are the youngest side and most balanced team, after a defeat, they will be more eager to win this match. But we have to focus only on winning. We need to bag 3 points in this match too.”

Indian Arrows will take on Kickstart FC tomorrow at the Capital Ground from 15:30h IST onwards and will be streamed live on Indian Football YouTube channel.

Previous Hans Women FC fight back to defeat Odisha Police in five-goal thriller!
Next SSB conclude their IWL campaign with an emphatic 6-1 win against PIFA!