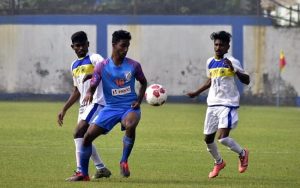 The Indian Arrows went down 0-2 against George Telegraph SC at the Sailen Manna Stadium in Howrah on Wednesday, December 9 in a Group C encounter in the 123rd IFA Shield.

Stanley Eze opened the scoring in the first half for George Telegraph, while Gautam Das headed in a late goal to seal the three points for the Kolkata-based side.

It was a mixed start for the Indian Arrows, who were playing their second match of the tournament, as they conceded an early penalty just minutes after kick-off. George Telegraph striker Stanley Eze stepped up to take the penalty but Indian Arrows keeper Ahan Prakash leapt in the correct direction to palm it away.

Minutes later, Tapan Haldar soared up the right flank, leaving the defenders flat-footed, to unleash a right-footed drive. However, the shot was saved.

However, Eze put George Telegraph in the lead a little ahead of the quarter-hour mark when his shot aimed at the bottom corner crept in off the post, despite a touch from the keeper.

Tapan got an identical chance as he was played through down the right again, but this time, he sent his shot over the crossbar.

Gurkirat toiled hard upfront during the first half, holding the ball up for his teammates and drew a lot of fouls in the process. However, the George Telegraph defence held on to their lead into the first half.

The Indian Arrows had a good restart after the change of ends. Gurkirat was again fouled just outside the box as he got up immediately to take the free-kick, which crashed into the far post and went out.

Indian Arrows boss Venkatesh soon brought in the changes, as Vanlalruatfela took his position in the forward line, ahead of Gurkirat. The substitute soon made his mark as he twisted and turned to make some space on the right, before crossing it in for Parthib Gogoi who nodded it goalwards. However, it was saved.

With around 10 minutes of regulation time left on the clock, Gautam Das headed in a cross to double the lead for George Telegraph.

Vanlalruatfela soon had the chance to pull one back when he broke free down the left and attempted to curl one past the keeper, but the shot was saved.

The Mizo forward made a couple of more inroads late in the game, but could not find the net as the referee brought the match to an end.