India’s Bembem Devi: I’m happy to be playing an active role in shaping the Youth system! 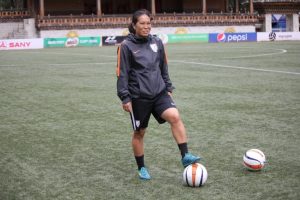 The legendary Bembem Devi who was in her first Coaching assignment in the SAFF U-15 Women’s Championship says she’s extremely happy to be playing an active role to redefine the youth setup of women’s football in our Country. After India’s triumph in the final against Bangladesh, Bembem spoke at length about her journey as a Coach, her dream, assessment of the present batch, the youth structure and much more.

How satisfying is it to win as a Coach?

How different is winning as a Coach as compared to a Player?

I was sure about my abilities as a player but unless AIFF hadn’t spotted me as a Coach, I would have taken more time to come out as a Coach. Winning as a Coach is living around the emotion but winning as a Player is like living in the emotion. Both are different feelings and I am fortunate to have experienced both.

So have you settled down as a Coach?

I am still settling down. There’s so much still to learn and achieve. I reiterate, maybe I wasn’t much sure about my coaching instincts till AIFF persuaded me to take it up. I was still a player at that time.

Any regrets for taking it up?

Looking back, there are absolutely no regrets. Today I know I made the right decision. But I was kind of brought into Coaching – it wasn’t completely my decision. AIFF’s trust means a lot to me. I am very happy to be playing an active role in the effort to redefine the youth setup of women’s football in our Country. The youth set-up, after all, is the bedrock of all footballing success.

What was your assessment of the final which India won?

Bangladesh was always going to be a tough team to play against. But we stayed united and that saw us through. We had devised a plan to counter their forwards and it worked. We wanted to score an early goal but even though we came close, we scored it eventually. This batch is really talented and I am happy to nurture them into better players.

All the players look up to you and want to follow your path.

I am just fortunate to have such a career. But right now I want to implement whatever I have learnt as a player into my career and help in youth development. Women’s Football on India is on the rise and I am doing my part.