India’s Blue Tigresses gear up to put up a confident show against Pakistan!

Press Release 2022-09-06 Asia, Team India, Women Comments Off on India’s Blue Tigresses gear up to put up a confident show against Pakistan! 302 Views 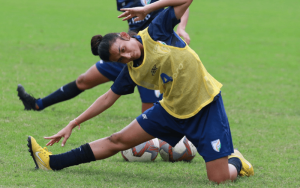 It was in 2018 in the AFC U19 Women’s Qualifiers that the then Indian girls had romped home to a 18-0 victory against Pakistan.

Two names who can never be erased from our minds from that encounter are that of Renu, and Soumya Guguloth. Renu had put up a five-star performance scoring five goals, while Soumya had scored a brace in that match.

Four years later, these two girls have matured, and are now with the Women’s Senior National Team — all set to play in India’s opening encounter against Pakistan in the SAFF Women’s Championship.

“It gives me goosebumps every time we play against Pakistan. We are mentally, and physically confident, and aim to put up a strong performance,” Renu said.

“I gave my best in my last match against Pakistan. But this time it will be for the Senior team. It’s not just me, but everyone is geared up. If I get a chance I will surely love to score,” she smiled.

When asked about her experience about facing Pakistan, Soumya quipped: “An Indo-Pak clash is always an exciting one, and both teams will be going all out to win it.”

Captain Ashalata Devi who had also faced Pakistan in the SAFF Women’s Championship in 2014 recalled her memories. She believes the team is much more focussed at the moment.

“Our first match against Pakistan will be a crucial one. We want to give our best. It will be a high-intensity match for sure. They have a new team. But we fear none,” the captain maintained.

“It is important to be focused, and we are working very hard to do the right things in every possible way”, she added.

The match will be streamed live on Eleven Sports platform.