India’s Manvir Singh: Balwant Singh is like my bade bhaiya! 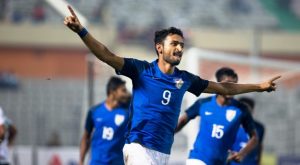 The man of the moment, Indian National Team striker Manvir Singh who came up with two delectable strikes against Pakistan admitted that since making his National Team debut against Mauritius he has become a more “disciplined” player.

“Discipline is something which cannot be ever compromised when you are playing for the National Team. It leaves a huge impression in the build-up of a person’s character, especially a player’s. It helps us build our character from within,” he stated.

The Punjab-born striker shared that Balwant Singh has always been by his side always and his invaluable inputs have always come handy to him.

“Ballu-paaji has always been just a phone call away. In 2013, when I started playing in JCT Academy he came to know about me. After I joined Mohammedan Sporting, I met him for the first time. He always shares his experiences with me regarding the technicalities of the game, decision making and many more. I fall short of words to thank him. He is just like my Bade bhaiya in the football fraternity,” Manvir uttered.

Manvir who has scored three goals in the SAFF Cup till now credited National Coach Stephen Constantine to “make me believe in myself”.

“I had played in AFC U-23 Championship Qualifiers under him and then I was called for the Tri-Nation Series. The sheer dedication of our coach and the self-belief that he instils among players does the trick. He has made me believe in myself as a player,” Manvir said.

“The GPS system has been a huge aid to the players. We can assess ourselves on a day-to-day basis and the self-evaluation helps every one of them to set the target,” he said. “We get to know many minute details akin to the number of sprints, maximum speed attained, etc. The data always helps one to get a clear picture of oneself and evaluate based on the day’s performance.”