ISL champions Hyderabad FC aim to end 2022 on a high! 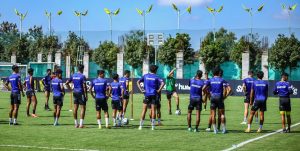 After registering an impressive victory in Bengaluru, Hyderabad FC will look to put in a similar performance this week when they take on NorthEast United FC in a tricky Indian Super League clash at the GMC Balayogi Athletic Stadium in Hyderabad this Thursday.

Hyderabad FC, who now have 25 points from 11 games, are second in the league table and will aim to put pressure on league leaders Mumbai City FC with a positive result in this tie.

The Highlanders registered their first win of the 2022-23 campaign under new coach Vincenzo Annese in impressive fashion last weekend when they beat ATK Mohun Bagan 1-0. They could prove to be a tough test for Hyderabad FC in this crunch clash.

Although they struggled in the first half of the current campaign, Wilmar Jordan’s winner against the Mariners will give them plenty of confidence going into this tie.

The likes of Romain Philippoteaux, Jon Gaztanaga, Rochharzela, Pragyan Gogoi and Aaron Evans have been impressive in bits and could trouble his side, believes Hyderabad FC Head Coach Manolo Marquez.

“NorthEast United FC did not deserve to be on zero points with the previous coach. They had some very close games but have now changed the coach and now registered their first win,” said Manolo.

“They have improved in many aspects, are stronger defensively, and are a threat on the counterattack. They have really good players and this is another game that will be very difficult for us,” he added.

Hyderabad FC saw their star striker Bartholomew Ogbeche get back among the goals after a mini-drought in the last game against Bengaluru FC. Joel Chianese was also on the scoresheet while Halicharan Narzary continues to make an impact in front of goal.

The backline has been well shielded by Gurmeet Singh while Borja Herrera, Hitesh Sharma and Nim Dorjee Tamang stepped up in the absence of key players. After three consecutive victories, Coach Manolo Marquez is quietly confident that his side will put in a strong performance in this game.

“When you play football in a competition like the ISL, you need to collect points in every moment. The mood in the camp is always good and we are ready to play against another good team,” he said.

Hyderabad FC currently have the best defensive record in the league, but the Highlanders are finding their feet and will surely provide a tough test on Thursday.

The game kicks off at 7:30pm IST on Thursday and will be telecasted live on the Star Sports Network with live streaming on Disney+ Hotstar and JioTV.