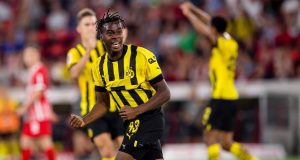 Borussia Dortmund have prematurely extended their contract with Jamie Bynoe-Gittens until June 30, 2025. Last week, the eight-time German champions and the 18-year-old English attacker agreed on a contract extension.

Borussia Dortmund’s sporting director Sebastian Kehl has talked about the young Englishman’s “exciting development”, and this is particularly true for the period since the spring: towards the end of last season, Bynoe-Gittens made his debut in the 6-1 win over VfL Wolfsburg, adding three more appearances in the Bundesliga before the season finished. On top of all that, he won the German Championship with the BVB U-19s. During the summer break, the London native played for England’s U-19 in the European U-19 Championship – and added another trophy to his collection.

Since the start of this season, Bynoe-Gittens has been permanent fixture in the first team squad. In the Black and Yellows’ 3-1 away win in Freiburg on Friday, he scored the immensely important equaliser – his first goal in the Bundesliga. BVB coach Edin Terzic praised him as a “player who can make the difference for us”. Sporting director Kehl puts the aforementioned development down to the following: “Jamie’s speed and creativity have always been excellent. With his unpredictability in one-on-one situations, he gives our squad a very special element even at his young age. It’s fun to watch him work on himself and his game. We think he still has a lot more potential for development, and we will give him the time he needs to do it.”

Jamie Bynoe-Gittens stresses that the confidence of the sporting executives “means a lot to me. It was always my goal to continue at BVB after the Coronavirus and some injuries at the beginning of my journey that has just begun. Now I can’t wait to continue working hard on myself and my game to hopefully help the team in the coming months and years.”

Previous XtraTime VIDEO: Who could be part of East Bengal support staff?
Next The road to the 2023 U-23 AFCON – Morocco now mapped out!