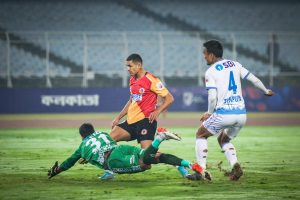 Jamshedpur FC bags second win in the Indian Super League 2022-23. As they beat East Bengal FC 2-1 in the away game at Kolkata.

Jamshedpur FC head coach Aidy Boothroyd made some major changes in his starting lineup. Boris Singh along with Pratik Chaudhari returned to the starting lineup while JET and Ishan Pandita were named among the subs. The gaffer started with a 4-4-1-1 iformation with Daniel Chima as the sole striker upfront.

East Bengal FC took the early lead within the 12th minute of the game. Cleiton Silva opened the scoring as he netted a rebound past Vishal.

In spite of the quick setback, the men of steel maintained their counter-attacking display. Boris got the best chance in the first half when Ritwik lobbed the ball from a fine cross but finally hit the side net.

Going into the lemon break the score line remained 1-0 with East Bengal FC having the lead.

Coming back in the second half Rafael Crivellaro started to control the midfield. As he kept on pulling strings at the edge of the box looking for space along the opposition’s defence.

Aidy made a triple substitution around the hour mark bringing in Ishan, Harry and German replacing Boris, Chima and Dinpuia which immediately changed the course of the game. As the men of steel got back into the rhythm finding the equalizer in the 61st minute. Harry Swayer found a deflection near the penalty spot and did no mistake to send it home.

The game finally opened up with both sides looking for the winner in the dying quarters. Crivellaro’s play-making in the centre of the park made sure Jamshedpur FC maintained dominance across the attacking third, while Ishan Pandita constantly kept the hosts busy inside the box.

Finally, Ritwik Das scored the winner in the 85th minute. Germanpreet came up with a fine cross inside the box and Ritwik did no mistake to head it inside the goal. This marked the second win for the Men of Steel in the Indian Super League 2022-23

With this win, Jamshedpur FC remains 10th in the league table with now nine points from 14 matches.

Jamshedpur FC next plays Bengaluru FC at the home on January 18.