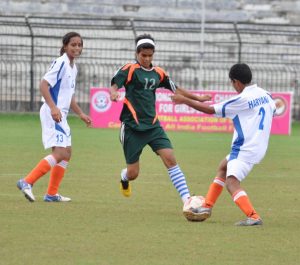 Day 12 of the 2016 edition of the Junior Girls National Football Championship is being held in Cuttack, Odisha with two games played in total across the match day at the Barabati Stadium.

Match No-35: Tamil Nadu 3-0 Pondicherry – Barabati Stadium
Tamil Nadu scored a vital 3-0 win over Pondicherry to reach the semifinals of the tournament. The goalscorers for Tamil Nadu were Karthiga (52nd, 62nd) and Vijayakumari (69th).

Match No-35: Bihar 2-4 Haryana – Barabati Stadium
Haryana scored a 4-2 win over Bihar to reach the semifinals of the tournament. The goalscorers for Haryana were Renu (23rd), Poonam (24th), Soniya Kumari (34th), and Nisha (44th); while Bihar made a late comeback through goals from Archana Kumari (69th) and Baby Kumari (78th), but it wasn’t enough.

With these two final matches, the quarterfinal league stage ended today with Manipur and Odisha qualifying from Group A, while Haryana and Tamil Nadu made it from Group B.

In the semifinals Manipur would face Tamil Nadu, while hosts Odisha would face Haryana for a place in the final.