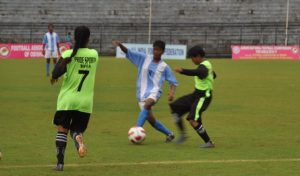 Day two of the 2016 edition of the Junior Girls National Football Championship kicked-off in Cuttack, Odisha with four games played in total across the two official venues – Barabati Stadium and Odisha Police Ground.

On a day of one sided matches, an impressive 53 goals were scored across the four matches with all the winning teams at least scoring 10 goals with Bihar scoring an astonishing 20 goals against Himachal Pradesh.