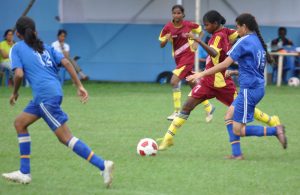 Day three of the 2016 edition of the Junior Girls National Football Championship kicked-off in Cuttack, Odisha with four games played in total across the two official venues – Barabati Stadium and Odisha Police Ground.

Match No-11: West Bengal 2-3 Kerala – Barabati Stadium
Kerala had to overcome some anxious moments before defeating West Bengal 3-2. The goals for Kerala were scored by Unnimaya (43rd, 74th) and Anagha (57th), but they had to overcome a late Bengal surge with goals from Sayani Naskar (75th) and Sunita Sarkar (81st).