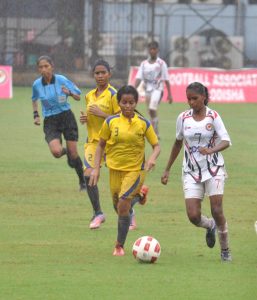 Day seven of the 2016 edition of the Junior Girls National Football Championship kicked-off in Cuttack, Odisha with two games to be played in total across the day at the Barabati Stadium.

Rains played spoil sport on the first of the quarterfinal league with the Jharkhand vs Manipur match having to be abandoned due to the weather.

Match No-25: Odisha 2-0 Goa – Barabati Stadium
In the day’s other game, hosts Odisha beat Goa 2-0 through the goals of Jasmani Samad in the 7th and 67th minute to give the home girls a big chance to reach the semifinals.