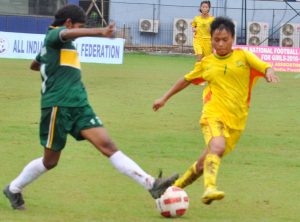 Defending Champions Manipur will look forward to lifting the silverware but they have to withstand the resilient girls from Haryana to win the final battle of the Junior Girls National Football Championships at the Barabati Stadium in Cuttack on Sunday, July 17.

The Manipur girls, under the tutelage of Chaoba Devi have bamboozled every opponent having inundated them with goals. They possess an intimidating attacking line-up comprising of Ratanbala Devi, Hemolata Devi and Daya Devi – who have registered not less than 26 goals in the quarterfinal stage and 6 goals against Tamil Nadu in the semifinal.

On the other hand, the Haryana girls have emphasised on their sharp counter-attacking ability to churn out results with their frontline attackers, Nisha and Renu, have always coordinated well to wreck the rivals.

“Although we have performed meticulously till now, the Final will be a different ball game altogether. We have to start from the scratch,” Chaoba Devi sounded pretty cautious ahead of the big day. Referred to as ‘Ojha’ the Teacher by her wards, Chaoba, a former India Captain has already Coached her State to two junior titles and a National Games Gold Medal. “It’s not about feats. It’s about representing our State. We will give our best.”

But she showed huge respect for the opposition. “It’s true that we have scored goals aplenty but Haryana have overwhelmed the home team in the semi-final, an astounding feat indeed. They are a very good Team,” she certified.

Having reached the Final, Haryana Coach Anil Dhull appeared to be ecstatic. “The entire credit goes to the girls. They have shown their character to garner the results,” he said.

On being asked whether his Team will start as the underdogs against mighty Manipur in the final, he stated: “Manipur have harried whomsoever they have faced in the Tournament so far. But their defence hasn’t been tested till now. Once we find a crack in between, it might pose a threat to them.”

Chaoba might sense a relief as she has an almost cent percent fit team at her disposal whereas Haryana medio Samiksha is still carrying a niggle. Shreya, the seasoned custodian, is nursing a groin injury as well.

Although there will be a single winner in the Final, all these girls would go back to their home with a lot of learning experience which would provide an added boost to their future career.

The final is scheduled to kick-off at 5pm on July 17 at the Barabati Stadium in Cuttack.