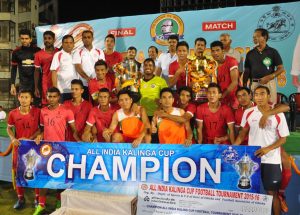 Kolkata-based Army XI have lifted the champions trophy of the 2016 Kalinga Cup after defeating local side Bidanasi Club 5-1 in the final played at the Barabati Stadium in Cuttack on Wednesday, May 25 evening.

Army XI were in control from the start, but they had to wait 22 minutes to go ahead through a Suresh Meetei goal. Lalian Mawia doubled the lead in the 27th minute before Arunjit Metei made it 3-0 in the 31st minute. It stayed 3-0 for the Armymen at the break.

In the second session Army XI striker Arjun Tudu scored a brace in the 61st and 82nd minute to give his side a 5-0 lead before Bidanasi Club scored their consolation goal through Bijay Behera in the 88th minute.

In the end Army XI won the match 5-1 and deservingly lifted the Kalinga Cup trophy along with a cheque of Rs 3 lakhs (300,000).