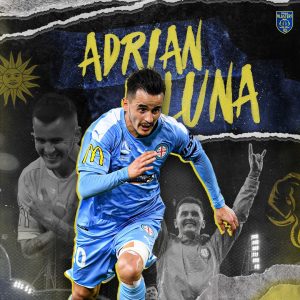 Kerala Blasters FC have announced the signing of midfielder Adrián Nicolás Luna Retamar ahead of the 2021/22 ISL season. The Uruguayan attacking midfielder joins Kerala Blasters from Melbourne City FC on a two-year contract.

Adrián Luna, who made 24 appearances for Melbourne City in the A league last season had found the net three times and assisted four goals for the club. He made his first team debut with Defensor and has been a regular in their side, from there he was later signed by the LaLiga Club RCD Espanyol in Barcelona in the year 2011. From RCD Espanyol he was sent out for short loan stints with Gimnàstic de Tarragona and CE Sabadell FC.

The versatile midfielder has spent his last two season in the A-League and has been a regular contender for Melbourne City where he won the championship in the 2021 A-League season. He wore the Uruguayan colours for the Under-17s as well as the U-20 national teams and has netted a total of nine goals. He also played in the FIFA U-17 World Cup in 2009 and the FIFA U-20 World Cup in 2011 and has scored one goal each in both the tournaments.

Kerala Blasters FC sporting director Karolis Skinkys said, “Adrián Luna is a player with great calibre, and I am sure that this will make our team stronger. Apart from being a good playmaker and smart operator in tight spaces, I liked that Adrian is a hardworking player who always cares about team performance. So, I would like to welcome Adrian to join the Kerala Blasters family.”

Adrián Luna commented, “Very happy to join Kerala Blasters, the great family with the best fans in the country without a doubt. I am looking forward to training and meeting my teammates and all the technical staff.”

Previous Sanson Pereira extends contract with FC Goa until 2024!
Next TV9 Bangla VIDEO: What options remain for East Bengal Club to get out of this mess?