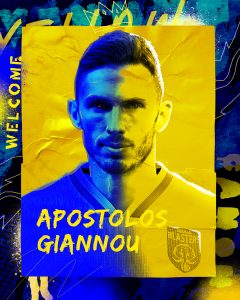 Kerala Blasters have announced the signing of Greek-Australian International striker Apostolos Giannou for the 2022/2023 season of the Indian Super League. He joins the Kerala Blasters from A-League Club Macarthur FC and will don the iconic Yellow until the summer of 2023.

Kerala Blasters asked their fans if they can pronounce the name of new signing Apostolos Giannou!