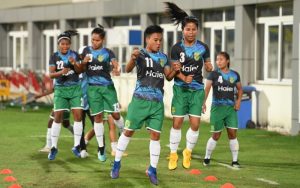 Both Mata Rukmani FC and Kickstart FC will eye to bounce back after their latest losses when they cross swords in the Indian Women’s League, on Wednesday, May 18 at the Capital Ground.

Ahead of the big game, Mata Rukmani head coach Sandeep Singh said, “It is another opportunity for us to play against a top-notch team. We are looking to it.”

Quizzed about the approach going into the next game, he said, “We will come fully prepared and would like to play our football and give them a tough game.”

Kickstart, who have been impressive so far in the IWL, suffered a massive 0-5 loss at the hands of Gokulam Kerala FC.

Head coach Amrutha said, “After the last defeat, we have to look at this match as an important opportunity to bounce back. We will be playing against a younger side so we have to give our maximum to get the three points.”

Quizzed about her game plan, Amrutha said, “We have to dominate in the first minutes and need a good score too. We have to concentrate more on the finishing part of our game.”

Mata Rukmani FC will face Kickstart FC at the Capital Ground at 3.30pm IST, and the match will be broadcast live on Eurosport, and streamed live on the Indian Football YouTube channel.

Previous Odisha Sports aim to get back to winning ways against struggling Hans Women FC!
Next PIFA determined to earn full points against Odisha Police!