Ladakh and its fledgling love for football!

Press Release 2022-12-28 General Comments Off on Ladakh and its fledgling love for football! 499 Views 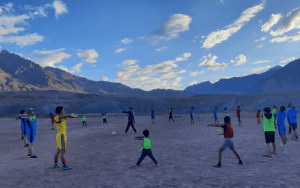 Ladakh, one of India’s newest union territories, sandwiched between the Karakoram Mountain range and the Himalayas, has always been known for its surreal landscapes, unique Buddhist monasteries, high mountain passes, and vibrant culture. And now, football too.

On December 23, 2022, the Ladakh football team created history at the Jawaharlal Nehru Stadium in New Delhi, playing out a 2-2 draw against Uttarakhand in their first-ever match at the Santosh Trophy. Twenty-five-year-old Chinba Tharchin scored twice in the first nine minutes to send Ladakh into dreamland. Although their fellow mountainous visitors got back on level terms, the 22 men of Ladakh, who experienced the biggest day of their lives, made one thing clear to the rest of the nation – they were not here to make up the numbers.

“No one expected Ladakh to score two goals. It was a fantastic result for us,” said coach Harpreet Bedi, who has spent the last two years in Ladakh working in the youth setup and as the technical director of the Ladakh Football Association (LFA).

For Tharchin, scoring the brace felt easier than finding words to describe his emotions from the big day. “Scoring Ladakh’s first goal was my dream come true,” said the man from Bodh Kharboo, a small village in the Kargil district. “Representing Ladakh was not just my dream, but also that of each and every member of our squad, and of so many youngsters back home,” Tharchin added with immense pride.

Coach Bedi opined that the match has proved to be the single biggest advertisement for football in Ladakh. “After the news of our result from the first game reached Ladakh, we received a lot of support, good wishes, and prayers from the people.

“It means a lot to us because now people don’t just think of football as a sport, but as a sport played by Ladakhis – and not only in towns like Leh and Kargil, but also in remote villages as well. They now know that there exists a Ladakh football team that is participating in the Santosh Trophy,” revealed Bedi.

Geographically, Ladakh is huge. It is the 17th-largest state/union territory by area, but the second lowest in terms of population, making it by far the least densely populated region of India. “Spreading awareness about the game to every nook and cranny of Ladakh was never going to be easy. But now, we’re seeing that not just the younger generation, but their parents are also starting to take interest,” Bedi said.

After being granted affiliation by the AIFF in February this year, the Ladakh Football Association has already made notable progress. Within four months, the union territory participated in its first tournament at the national level, the U-17 Women’s National Football Championship held in Assam, also led by coach Bedi. In September, Ladakh witnessed its first coaching course, the AIFF E Certificate, conducted by the LFA and sponsored under the FIFA LOC U-17 Women’s World Cup 2022 Coach Education Scholarship Programme.

India’s newest football association has made strides in the arena of futsal as well. Ladakh’s inaugural club championship was won by Dzawo 11 FC, who will take the honour of representing the union territory at the Futsal Club Championship in New Delhi next year.

However, there is still a lot of groundwork to be done in order to put a proper structure in place. The lack of football tournaments meant that open trials were the only way to pick players for the Santosh Trophy squad. “We conducted separate trials in the two districts of Ladakh – Leh and Kargil. The best players from both places were then brought together for a final trial,” explained Bedi.

The trials, assisted by former Indian women’s team coach Sajid Dar, were met with a great response, with over 200 aspirants attending. Ultimately, the field was narrowed down to the final 22, each of whom has worn the Ladakh shirt with pure passion, according to Bedi.

In their second match a couple of days later, Ladakh, reduced to 10 men for most of the contest, were handed a 0-7 drubbing by hosts Delhi at the Ambedkar Stadium. However, Bedi didn’t let that affect his team’s high spirits. “We know that results like these happen, yeah. But we were quick to move on. Our game plan was set, and we wanted to see improvements with every match.”

And they did improve in the next one. Mohmad Ilyas and Stanzin Gilik added their names to the scoresheet as Ladakh gave last season’s semi-finalists Karnataka a real run for their money in a narrow 2-3 defeat.

“We are still searching for our first win,” said an adamant Tharchin, who could only play 45 minutes since the opening match due to an injury. The forward is trying his best to return to full fitness ahead of his side’s two remaining fixtures against Gujarat and Tripura.

Arguably the most satisfying feature of this Ladakh team for Bedi is that the entire squad is made up of Ladakh-origin players. “Not a single one of them, representing us in the Santosh Trophy for the first time, is from outside Ladakh,” he stated emphatically.

“All these proud Ladakhis are highly motivated to play in a prestigious tournament like this. The younger ones are not under any pressure. They are eager to participate, to grow and to learn what actual professional football is. Our entire team is enjoying every single minute of each game. As a coach, I don’t just want them to learn, but have fun too,” Bedi added.

While a groundbreaking year for Ladakh football draws to an end, plans for the future are already in place. Ladakh’s participation in the current Santosh Trophy is also their preparation for next year’s tournament.