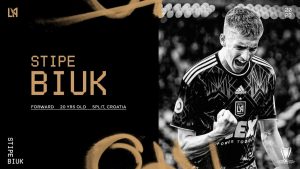 LAFC have announced that the Club has signed forward Stipe Biuk from Croatia’s Hajduk Split. The 20-year-old Croatian youth international is signed to a four-year contract through 2026 with a club option for 2027. Biuk will join LAFC as a part of Major League Soccer’s U-22 Initiative and will occupy an international roster spot pending receipt of his international Transfer Certificate (ITC) and P1 Visa.

“Stipe is an incredibly talented player with considerable experience for his age who is recognized as one of the top young players in Europe,” LAFC Co-President & General Manager John Thorrington said. “It is exciting to welcome a player of his quality, pedigree, and potential to LAFC, and we are confident he will excite our fans and contribute to our team’s success in the years to come.”

Biuk has played with the Hajduk Split first team since 2020, making his debut at 17 years old. He was named to UEFA.com’s 2022 list of “40 For The Future” of the most talented players under the age of 21 in Europe, and also was named among the finalists for the 2022 “Golden Boy Award”, an annual award that crowns Europe’s best young player of the year and was won by Barcelona’s Gavi.

Biuk has played at all youth levels for the Croatian National Team, and enjoyed a strong performance in the 2022 UEFA U-21 European Championships that saw Croatia advance to the quarterfinals.