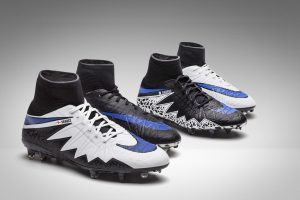 On Saturday, August 8, 2015, footballers Jamie Vardy and Riyad Mahrez had 5000/1 odds of leading their team to the English Premier League championship. On Sunday, May 15, 2016, they definitively defied logic to claim the title for the first time in their club’s history, just one year after narrowly avoiding relegation.

Along the way, the inseparable duo became synonymous with the club’s unstoppable attack, collectively netting 41 goals and accumulating 17 assists. The feat earned Mahrez Player of the Year accolades from the Professional Footballers’ Association and garnered Vardy, who became the first player to score in 11 consecutive Premier League games, the Football Writers’ Footballer of the Year award.

To commemorate the pair’s thrilling on-pitch chemistry, Nike Football has presented each with custom VAHREZ Nike iD Hypervenom Phantom II boots to be worn in the final match of the season. Identical upon first glance, the boots boast subtle differences that reflect the players’ complementary play: Vardy’s right boot is predominantly white and his left is black, while Mahrez’s left boot is white and his right boot is black. Additionally, each boot features its respective player’s national flag: the Algerian flag on Mahrez’s and the English flag on Vardy’s.

As Mahrez explains, “Jamie and I took unusual routes to get to here and this helps our partnership – I’m honoured to wear these boots as symbols of our achievements this season.”

Vardy underscores his teammate’s respect, stating, “I’ve worn some special boots this season and these stand out. The last game of this season is going to be an occasion, and I appreciate the understanding I have with Riyad – it’s something I’m proud of and the boots reflect that.”