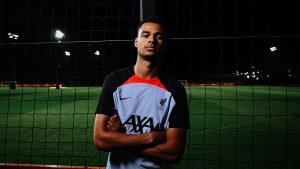 Cody Gakpo is officially a Liverpool FC player after the formalities of his transfer from PSV Eindhoven were successfully concluded on Tuesday.

The 23-year-old is now formally registered with the Reds and able to begin work with his new club.

The Netherlands international could now come into contention for Saturday’s Emirates FA Cup home tie with Wolverhampton Wanderers at Anfield.