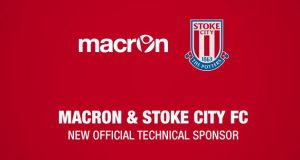 Macron and Stoke City FC have agreed an historic five-year deal between the WPL club and the Italy-based kit supplier Macron that will see the two organizations working together until 2021.

The new agreement sets not only a financially lucrative technical sponsorship deal for the club, but boasts for Macron the sponsorship of a top 10 club in the world’s most viewed football league. This marks another milestone for Macron in its already vast paddock of club sponsorship.

A key part of this deal was to allow Stoke City FC the opportunity to work hand in hand with Macron’s designers allowing the club to co-develop a bespoke match-day, training, travel and accessories range that is both technically cutting edge as well as being forward thinking in terms of fashion in true Italian style.

The collection will pay homage to the stature of the English Premier League giants and the fans who follow them with passion. As well as kitting out the team, Macron is developing a specialized retail collection that aims to encapsulate the status of the club and pay homage to the legends of the game that have graced the field at the Britannia Stadium as well as the Victoria Ground before it.

Macron looks to use its experience gained from other such sponsorships as Crystal Palace, SS Lazio and Scottish Rugby to make the new collection a real fans favourite. Supporters can continue to buy the extensive range of official Macron merchandise all year round at the club store at the ground.

The Italian sports kit manufacturer, which is based in Bologna, intends to heavily invest in the local area where Macron has already opened a new Macron Store in Newcastle Under Lyme, which will allow local fans and clubs of all sports, from grassroots to semi-professional clubs, to wear technically advance teamwear apparel from the European leader in the sector.