Macron is new technical sponsor of the champions of Argentina, CA Lanús!

Arunava Chaudhuri 2016-07-02 Americas Comments Off on Macron is new technical sponsor of the champions of Argentina, CA Lanús! 1,898 Views 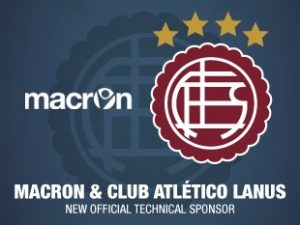 Macron has announced a new technical sponsorship agreement with the current champions of the Fútbol Argentino (Argentine Primera División), Club Atlético Lanús. The agreement will last for the following three seasons, which started yesterday on July 1, 2016.

Marcon is honoured to partner with an institution that is an example of dedication, passion and professionalism sustained by its 101 years of continuous growth. A real pride for the Southern area of the Buenos Aires Province, Club Atlético Lanús is the winner of the last Primera División championship, showing a top level football and obtaining recognition among all the Fútbol Argentino. The 2016 title is the fourth trophy in the history of the club: the Palmares includes Copa Conmebol 1996, Torneo Apertura 2007 and Copa Sudamericana 2013.

With this agreement Macron strengthens its presence in the Fútbol Argentino including Club Atlético Lanús among its elite clubs worldwide.