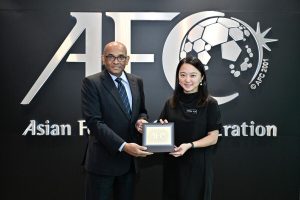 The AFC General Secretary, who was accompanied by the AFC Management, congratulated YB Puan Hannah Yeoh on her appointment as only the second woman to helm the Malaysian Ministry of Youth and Sports and thanked her office for the enduring partnership established over the years with the AFC.

Most notably, Datuk Seri Windsor acknowledged the steadfast contributions of the Ministry for Youth and Sports in assisting the AFC with numerous government related matters, particularly since the Confederation moved to its permanent home to Bukit Jalil in May 2000.

In addition to providing the Minister and her delegation with an overview of the AFC’s mandate in elevating the standards of Asian football across its 47 Member Associations, the AFC General Secretary also presented an update on the new AFC Stadium set to be built in collaboration with FIFA in the country’s administrative capital Putrajaya.

The Malaysian Minister for Youth and Sports was also presented with an appreciative plaque before embarking on a tour of the AFC House premises which has been the focal point of Asian football development throughout the decades.

YB Puan Hannah Yeoh recognised the role of football in strengthening national pride and the importance of the presence of the AFC House in Kuala Lumpur, Malaysia, and expressed her gratitude to the AFC General Secretary and the AFC Management for their warm hospitality.